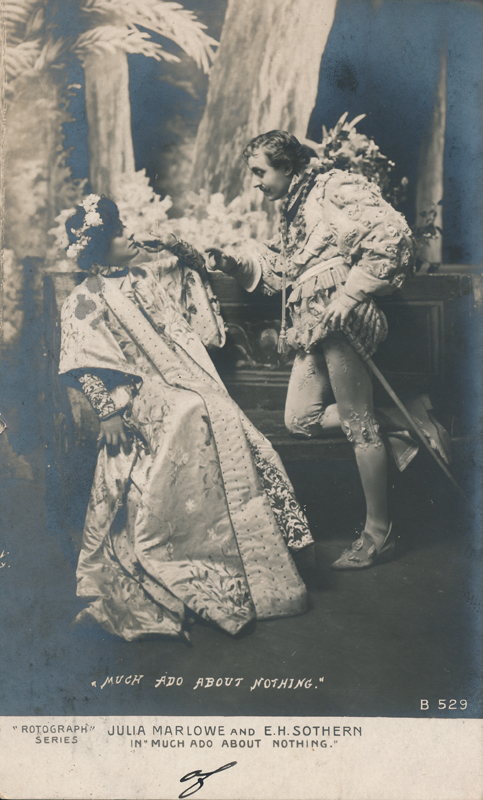 The primary plot of Much Ado About Nothing turns on the courtship and scandal involving young Hero and her suitor, Claudio, but the witty war of words between Claudio’s friend Benedick and Hero’s cousin Beatrice often takes center stage.

Set in Messina, the play begins as Don Pedro’s army returns after a victory. Benedick, a gentleman soldier, resumes a verbal duel with Beatrice, the niece of Messina’s governor, Leonato. Count Claudio is smitten with Leonato’s daughter, Hero. After Don Pedro woos her in disguise for Claudio, the two young lovers plan to marry in a week. To fill in the time until the wedding, Don Pedro and the others set about tricking Benedick and Beatrice into falling in love with each other. Meanwhile, Don Pedro’s disgruntled brother, Don John, plots to ruin Hero and halt her wedding. Claudio believes Don John’s deception, is convinced Hero has a lover, and, at the wedding, brutally rejects her.

With Hero in hiding and falsely reported dead, Beatrice persuades Benedick to fight Claudio. Tragedy is averted when the bumbling city watch, having discovered Don John’s treachery, arrives and clears Hero’s name. With Claudio forgiven, both couples are ready to get married (reproduced with permission from Folger).

Postcards of Much Ado About Nothing:

Productions of Much Ado About Nothing:

1891 Henry Irving‘s production of Much Ado About Nothing opened at the Lyceum Theatre (London) on January 5, 1891, and ran for fifty-three performances until March 3. Ellen Terry played Beatrice and Henry Irving played Benedick. The cast included William Terriss as Claudio, William MackIntosh as Dogberry, and Annie Irish as Hero (Wearing, I: 186).

1893 Henry Irving’s next production of Much Ado About Nothing opened at the Lyceum Theatre (London) on July 3 and ran for four performances; Irving played Benedick and Ellen Terry played Beatrice. Others in the cast were William Terriss as Claudio, William Haviland as Don John, Sam Johnson as Dogberry, and Jessie Millward as Hero (Wearing, I: 333).

1894 Henry Irving revived his Much Ado About Nothing at the Lyceum (London) for three performances on July 4. He played Benedick and Ellen Terry played Beatrice (Wearing, I: 415).

1895 Henry Irving’s three performances of Much Ado About Nothing opened at the Lyceum Theatre (London) on July 4; Irving played Benedick and Ellen Terry played Beatrice. Ben Webster performed as Claudio, Julia Arthur as Hero, William Haviland as Don John, and Sam Johnson as Dogberry (Wearing, I: 496-7).

1898 George Alexander was the general manager of a production of Much Ado About Nothing that opened at the St. James’s Theatre (London) and ran for fifty-two performances from February 16 until April 2. Alexander played Benedick opposite Julia Neilson‘s Beatrice. Also in the cast were H. B. Irving as Don John, Jay Davis as Hero, H. H. Vincent as Dogberry, and Robert Loraine as Claudio (Wearing, II: 719).

1901 April 15 marked the opening of Frank Benson’s festival season at Stratford-upon-Avon. The company presented for the first time at Stratford a cycle of the history plays: King John, Richard II, Henry IV, Part 2, Henry V, Henry VI, Part 2, and Richard III. The company presented five other plays as well, including Much Ado About Nothing (Loney, I: 8).

1903 On May 23, Gordon Craig presents Much Ado About Nothing at the Imperial Theatre, London, with Ellen Terry as Beatrice (Loney, I: 16).

1904 On October 17, the New York City producer Charles Frohman presented E. H. Sothern and Julia Marlowe playing for the first time together in a Shakespeare play. The performances included Hamlet, Romeo and Juliet, and Much Ado About Nothing (Loney, I: 23).

1906 Frank Benson opened the Shakespeare Festival at Stratford-upon-Avon on April 23, the dramatist’s birthday. In this three-week Festival he opened with Much Ado About Nothing and for the first time offered all three parts of Henry VI. His company performed ten other plays as well (Loney, I: 33).

1908 On February 17 Frank Benson’s company opened Much Ado About Nothing at the Coronet Theatre, London. Constance Benson played Beatrice (Loney, I: 44).

On April 20, Frank Benson opened the Stratford-upon-Avon Shakespeare Festival with Much Ado About Nothing; the company also performed A Midsummer Night’s Dream during this season. A notable event at the Festival was a performance of the William Poel production of Measure for Measure. Annie Horniman’s company had come down from Manchester especially for Poel’s “authentic” presentation of the play in what was understood then to be the conventions of the Elizabethan theater (Loney, I: 44).

1912 On November 11, Annie Russell‘s Old English Comedy Company opened its season at the 39th Street Theatre in New York City. The Shakespeare play was Much Ado About Nothing (Loney, I: 64).

Frank Benson’s summer season of Shakespeare’s plays opened on August 2 with The Merchant of Venice; other plays performed that season were As You Like It, Hamlet, King John, Richard II, The Merry Wives of Windsor, The Taming of the Shrew, Twelfth Night, and Henry IV, Part 2 (Loney, I: 68).

Frank Benson returned from the United States to direct the Stratford Summer Festival. He opened the four-week festval with Much Ado About Nothing. The company also presented Hamlet, Richard II, Henry IV, Part 2, Henry V, The Merry Wives of Windsor, The Merchant of Venice, Twelfth Night, Julius Caesar, As You Like It, The Taming of the Shrew, and Romeo and Juliet (Loney, I: 73).