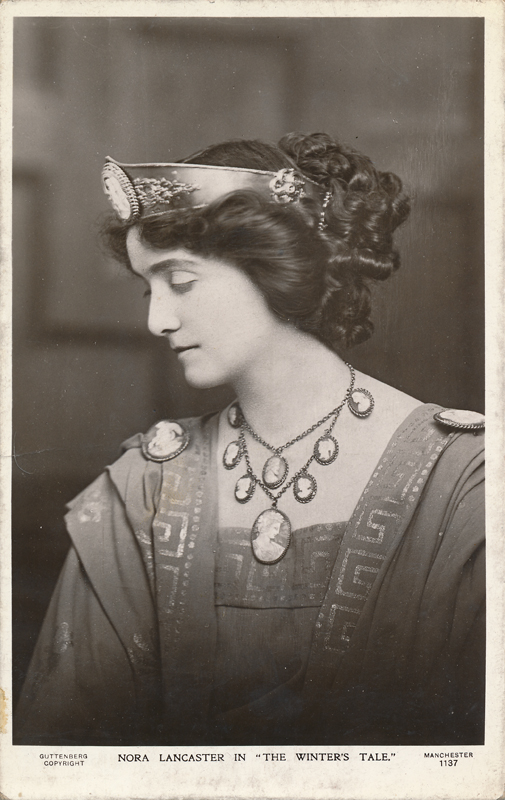 The “tale” of The Winter’s Tale unfolds in scenes set sixteen years apart. In the first part of the play, Leontes, king of Sicilia, plays host to his friend Polixenes, king of Bohemia. Suddenly, Leontes becomes unreasonably jealous of Polixenes and Leontes’s pregnant wife, Hermione. Leontes calls for Polixenes to be killed, but he escapes.

Hermione, under arrest, gives birth to a daughter; Leontes orders the baby to be taken overseas and abandoned. The death of the couple’s young son, Mamillius, brings Leontes to his senses, too late. Word arrives that Hermione, too, has died. In Bohemia, a shepherd finds and adopts the baby girl, Perdita.

Sixteen years later, the story resumes. Polixenes’s son, Florizell, loves Perdita. When Polixenes forbids the unequal match, the couple flees to Sicilia, where the tale reaches its conclusion. Perdita’s identity as a princess is revealed, allowing her and Florizell to marry; Leontes and Polixenes reconcile; and, with the help of Paulina, Hermione returns in the form of a statue, steps down from a pedestal, and reunites with her family (reproduced with permission from Folger).

Postcards of The Winter’s Tale:

Productions of The Winter’s Tale:

1903 Frank Benson opened a two-week Shakespeare Festival season at Stratford-upon-Avon on April 20. Among the plays his troupe presented were Hamlet, The Winter’s Tale, Macbeth, The Merry Wives of Windsor, and A Midsummer Night’s Dream (Loney, I: 16).