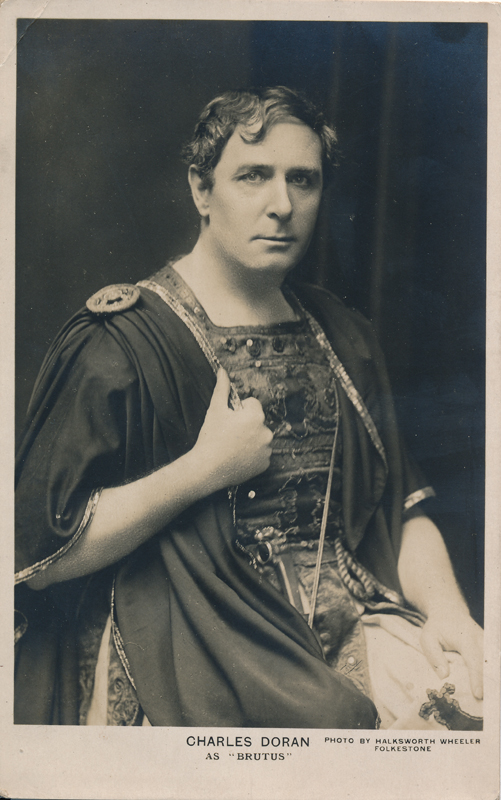 The evil that men do lives after them; The good is oft interred with their bones (3.2).

Caesar’s assassination is just the halfway point of Julius Caesar. The first part of the play leads to his death; the second portrays the consequences. As the action begins, Rome prepares for Caesar‘s triumphal entrance. Brutus, Caesar’s friend and ally, fears that Caesar will become king, destroying the republic. Cassius and others convince Brutus to join a conspiracy to kill Caesar.

On the day of the assassination, Caesar plans to stay home at the urging of his wife, Calphurnia. A conspirator, Decius Brutus, persuades him to go to the Senate with the other conspirators and his friend, Mark Antony. At the Senate, the conspirators stab Caesar to death. Antony uses a funeral oration to turn the citizens of Rome against them. Brutus and Cassius escape as Antony joins forces with Octavius Caesar.

Encamped with their armies, Brutus and Cassius quarrel, then agree to march on Antony and Octavius. In the battle that follows, Cassius, misled by erroneous reports of loss, persuades a slave to kill him; Brutus’s army is defeated. Brutus commits suicide, praised by Antony as “the noblest Roman of them all” (reproduced with permission from Folger).

1892 Edmund Tearle presented Julius Caesar at the Olympic Theatre (London) on April 16; Tearle played Brutus and the play ran for seven performances until April 23. The other players were W. S. Hardy as Marc Antony, A. Gow Bentinck as Julius Caesar, Cyril Grier as Octavius Caesar, and Theresa Osborne as Portia (Wearing, I: 208).

1898 Herbert Beerbohm Tree played Marc Antony in this production of Julius Caesar at Her Majesty’s Theatre (London); the play ran from January 22 until June 18, with a total of 161 peformances. The other players were Charles Fulton as Julius Caesar, Lewis Waller as Brutus, Louis and Alexander Calvert as Casca, and Evelyn Millard as Portia (Wearing, II: 714-15).

1909 On April 19, Frank Benson opened the Stratford-upon-Avon Shakespeare Festival with Julius Caesar. Other plays that season were Cymbeline, as well as thirteen others.

1910 Beginning on March 28, several companies presented a London Shakespeare Festival at His Majesty’s Theatre. Herbert Beerbohm Tree’s company played The Merry Wives of Windsor, Julius Caesar, Twelfth Night, and Hamlet. Norman Mckinnel presented King Lear and The Merchant of Venice; Arthur Bourchier and his company came next with The Merchant of Venice. H. B. Irving played Hamlet, and Frank Benson’s “Bensonians” followed with the Taming of the Shrew and Coriolanus. Poel’s Elizabethan Stage Society gave a performance—in the “original” sixteenth-century style—of The Two Gentlemen of Verona. Lewis Waller revived his Henry V, and Tree returned to close the Festival with The Merchant of Venice and Richard II (Loney, I: 54).

1910 At the first Stratford-upon-Avon Summer Shakespeare Festival, Benson presented The Winter’s Tale, Julius Caesar, Macbeth, Henry V, Twelfth Night, As You Like It, Richard II, Hamlet,and The Merry Wives of Windsor (Loney, I: 54).

1911 The London Shakespeare Festival opened on May 22 at His Majesty’s Theatre with Herbert Beerbohm Tree’s Julius Caesar, followed by Oscar Asche and Lily Brayton’s As You Like It. Next came The Merchant of Venice and Twelfth Night. Frank Benson presented The Taming of the Shrew, Tree revived his Henry VIII, and the Festival closed with Benson’s Richard III and on July 3, the final night, The Merry Wives of Windsor (Loney, I: 158).

1913 In the month of June Herbert Beerbohm Tree staged a revival of The Merchant of Venice, Twelfth Night, Julius Caesar, and Romeo and Juliet; Tree played Shylock, Malvolio, Marc Antony, and Mercutio (Loney, I: 68).