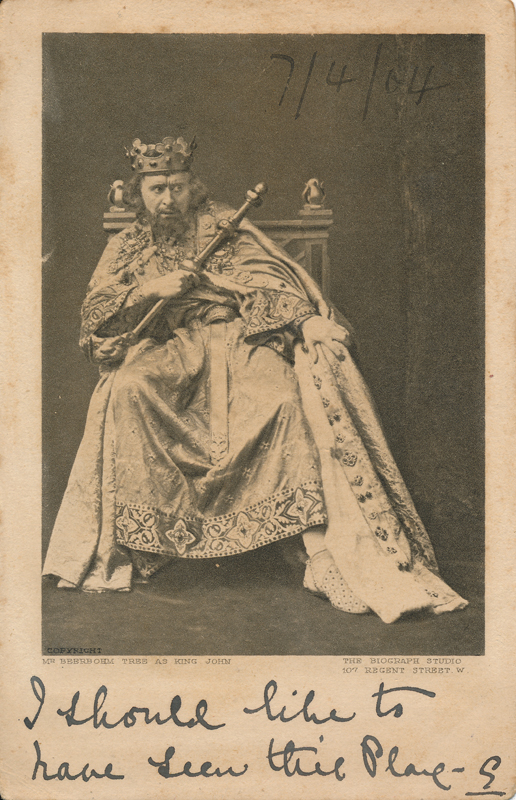 The events in King John take place in the thirteenth century, well before Shakespeare’s other English history plays. After the death of John’s brother, Richard I, John rules England.

John’s young nephew, Arthur, has a claim to the throne and is supported by the French. At first, a proposed marriage between the French crown prince and John’s niece, Blanche, calms Anglo-French tensions. Then the pope, in a dispute over recognizing an archbishop, excommunicates John and backs Arthur’s claim. After war erupts, John captures Arthur and orders his death. Arthur’s guardian, Hubert, prepares to burn out Arthur’s eyes, but then spares him. Arthur dies leaping from the prison wall. Arthur’s mother Constance grieves inconsolably.

Meanwhile, French forces reach England. John submits to the pope to gain his aid. Rebellious English nobles join the French, but return to John when they learn the French prince plans to kill them. English forces under the bastard son of Richard I expel the French, but a monk poisons King John, whose son becomes Henry III (reproduced with permission from Folger).

1899 Herbert Beerbohm Tree‘s production of King John ran from September 20, 1899 to January 1, 1900, for an impressive 114 performances. The venue was Her Majesty’s Theatre (London). Tree played John, and others in the cast were Julia Neilson as Constance, Charles Sefton and Caryll Field-Fisher as Arthur, Franklyn McLeary and Norman McKinnel as Hubert, Lewis Waller as Philip, and Louis Calvert as Cardinal Pandolph (Wearing, II: 830).

1901 April 15 marked the opening of Frank Benson‘s festival season at Stratford-upon-Avon. The company presented for the first time at Stratford a cycle of the history plays: King John, Richard II, Henry IV, Part 2, Henry V, Henry VI, Part 2, and Richard III. The company presented five other plays as well, including Much Ado About Nothing (Loney, I: 8).

1913 Frank Benson’s summer season of Shakespeare’s plays opened on August 2 with The Merchant of Venice; other plays performed that season were As You Like It, Hamlet, King John, Richard II, The Merry Wives of Windsor, Much Ado About Nothing, Romeo and Juliet, The Taming of the Shrew, Twelfth Night, and Henry IV, Part 2 (Loney, I: 68).