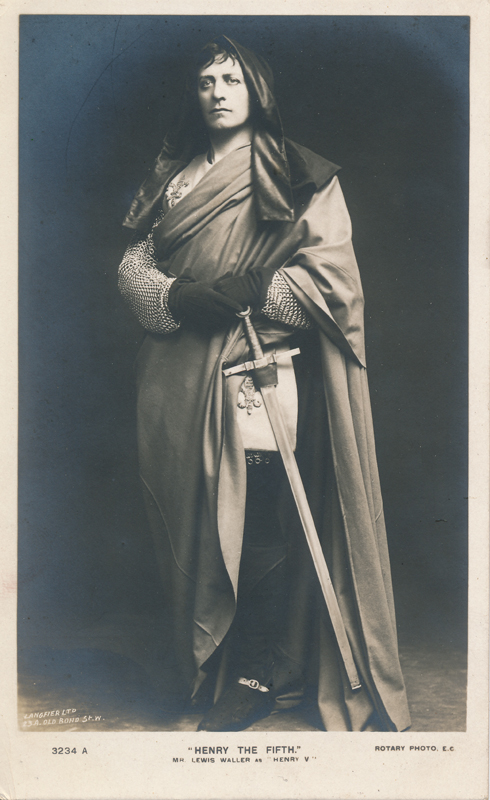 For he to-day that sheds his blood with me Shall be my brother (4.3).

Henry V begins at the English court, where the young king is persuaded that he has a claim to the throne of France. When the French dauphin, or heir apparent, insults him by sending him tennis balls, Henry launches his military expedition to France.

Before departing, Henry learns that three of his nobles have betrayed him, and he orders their execution. Meanwhile, his old tavern companions grieve over Sir John Falstaff’s death, and then leave for France.

Henry and his army lay siege to the French town of Harfleur, which surrenders. The Princess of France, Katherine, starts to learn English, but the French nobles are sure of success against Henry. Instead, Henry’s forces win a great victory at Agincourt.

After a brief return to England, Henry comes back to France to claim his rights and to set up his marriage to Princess Katherine. The play’s epilogue points out that Henry will die young and that England will as a result lose most of his French territories (reproduced with permission from Folger).

1900 Frank Benson‘s company gave seven performances of Henry V in February at the Lyceum Theatre (London) with Benson as Henry and his wife Constance as Katherine. Other familiar names in the cast were Matheson Lang as Montjoy, Henry Ainley as the Duke of Gloster, Oscar Asche as Pistol, and Lily Brayton as Alice (Wearing, I: 8-9) As well as this play, they presented A Midsummer Night’s Dream, Hamlet, Twelfth Night, and Antony and Cleopatra. An interesting note is that a young Isadora Duncan played one of the fairies in A Midsummer Night’s Dream (Loney, I: 3).

J. Comyns as managing director presented eighty performances of Henry V with Lewis Waller playing the part of Henry. The play ran at the Lyceum Theatre (London) from December 22, 1900, until March 16, 1901. Others in the cast were William Mollison as Pistol, E. M. Robson as Fluellen, Alexander Calvert as Gower, Gordon Doone as Jamy, and Lily Hanbury as the Chorus. Sarah Brooke played Katherine of France. The critics called the performance a “genuine and complete success” (Wearing, I: 67-8; Loney, I: 4).

1901 April 15 marked the opening of Frank Benson’s festival season at Stratford-upon-Avon. The company presented for the first time at Stratford a cycle of the history plays: King John, Richard II, Henry IV, Part 2, Henry V, Henry VI, Part 2, and Richard III. The company presented five other plays as well, including Much Ado About Nothing (Loney, I: 8).

William Poel’s Elizabethan Stage Society presented Henry V at the Burlington Gardens Theatre, London, on November 15. In keeping with the Society’s founding principles, the play was done as it would have been in Shakespeare’s time, with a minimum of scenery and props, lavish contemporary Elizabethan costuming, a thrust-stage, and an all-male cast (Loney, I: 8).

1908 Lewis Waller revived his acclaimed production of Henry V on November 25 at the Lyric Theatre, London (Loney, I: 45).

1910 Beginning on March 28, several companies presented a London Shakespeare Festival at His Majesty’s Theatre. Herbert Beerbohm Tree‘s company played The Merry Wives of Windsor, Julius Caesar, Twelfth Night, and Hamlet. Norman Mckinnel presented King Lear and The Merchant of Venice; Arthur Bourchier and his company came next with The Merchant of Venice. H. B. Irving played Hamlet, and Frank Benson’s “Bensonians” follo wed with theTaming of the Shrew and Coriolanus. Poel’s Elizabethan Stage Society gave a performance—in the “original” sixteenth-century style—of The Two Gentlemen of Verona. Lewis Waller revived his Henry V, and Tree returned to close the Festival with The Merchant of Venice and Richard II (Loney, I: 54).

1911 On April 17 the annual Stratford Shakespeare Festival opened with The Merry Wives of Windsor. This year Frank Benson also offered The Merchant of Venice, Twelfth Night,Much Ado About Nothing, Henry V, Julius Caesar, Macbeth, As You Like It, Romeo and Juliet, A Midsummer Night’s Dream, and Richard III (Loney, I: 158).

On July 22, Stratford’s second summer season began; this is the year that Baliol Holloway debuted with the Bensonians. The plays performed are A Midsummer Night’s Dream, Henry V, Richard II, The Merchant of Venice, Romeo and Juliet, As You Like It, The Taming of the Shrew, Hamlet, and the Tempest (Loney, I: 159).

1914 Frank Benson returned from the United States to direct the Stratford Summer Festival. He opened the four-week festval with Much Ado About Nothing. The company also presented Hamlet, Richard II, Henry IV, Part 2,The Merry Wives of Windsor, The Merchant of Venice, Twelfth Night, Julius Caesar, As You Like It, The Taming of the Shrew, and Romeo and Juliet (Loney, I: 73). The Festival ended with a rousing performance of Henry V in which Benson’s entire company marched on stage holding weapons such as spears and halberds showcasing patriotic solidarity. The date of this performance was August 4, the same day that Britain declared war on Germany (Fogg 11-12).