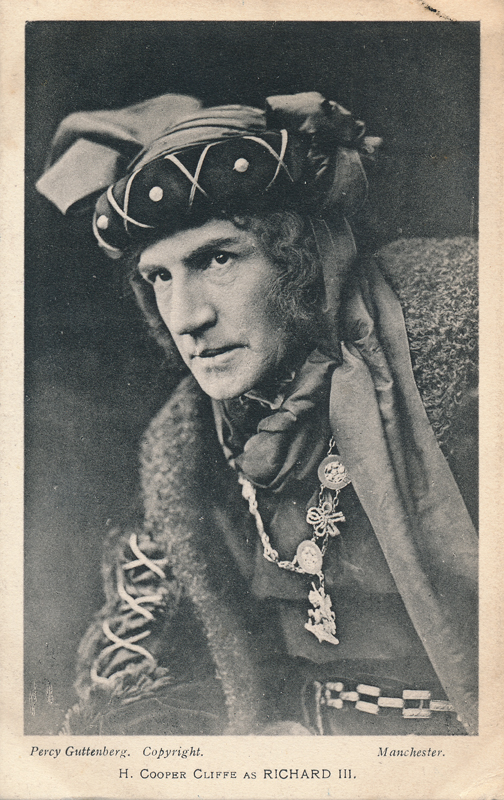 I am determined to prove a villain (1.1)

As Richard III opens, Richard is Duke of Gloucester and his brother, Edward IV, is king. Richard is eager to clear his way to the crown. He manipulates Edward into imprisoning their brother, Clarence, and then has Clarence murdered in the Tower. Meanwhile, Richard succeeds in marrying Lady Anne, even though he killed her father-in-law, Henry VI, and her husband.

When the ailing King Edward dies, Prince Edward, the older of his two young sons, is next in line for the throne. Richard houses the Prince and his younger brother in the Tower. Richard then stages events that yield him the crown.

After Richard’s coronation, he has the boys secretly killed. He also disposes of Anne, his wife, in order to court his niece, Elizabeth of York. Rebellious nobles rally to Henry Tudor, Earl of Richmond. When their armies meet, Richard is defeated and killed. Richmond becomes Henry VII. His marriage to Elizabeth of York ends the Wars of the Roses and starts the Tudor dynasty (reproduced with permission from Folger).

1901 April 15 marked the opening of Frank Benson‘s festival season at Stratford-upon-Avon. The company presented for the first time at Stratford a cycle of the history plays: King John, Richard II, Henry IV, Part 2, Henry V, Henry VI, Part 2, and Richard III. The company presented five other plays as well, including Much Ado About Nothing (Loney, I: 8).

1904 On December 5 at the Princess Theatre, New York City, Robert B. Mantell opened a two-week run of plays in repertory. He played Othello and Richard III. Marie Booth Russell performed with him (Loney, I: 24).

1910 On May 28 at the Lyceum Theatre, London, John Martin Harvey presented his Richard III; the production originally opened in Dublin at the Theatre Royale before Harvey brought the play to London.

The Stratford-upon-Avon Shakespeare Festival opened on April 22 this year. The Festival began with Herbert Beerbohm Tree’s Hamlet; Benson’s company then performed The Taming of the Shrew, The Two Gentlemen of Verona, and Richard III with Genevieve Ward and The Merchant of Venice with Ellen Terry. The season was cut short and ended when Edward VII died on May 6 (Loney, I: 54).

1911 On April 17 the annual Stratford Shakespeare Festival opened with The Merry Wives of Windsor.This year Frank Benson also offered The Merchant of Venice, Twelfth Night, Much Ado About Nothing, Henry V, Julius Caesar, Macbeth, As You Like It, Romeo and Juliet, A Midsummer Night’s Dream, and Richard III (Loney, I: 158).

The London Shakespeare Festival opened on May 22 at His Majesty’s Theatre with Beerbohm Tree’s Julius Caesar, followed by Oscar Asche and Lily Brayton‘s As You Like It. Next came The Merchant of Venice and Twelfth Night. Frank Benson presented The Taming of the Shrew, Tree revived his Henry VIII, and the Festival closed with Benson’s Richard III and on July 3, the final night, The Merry Wives of Windsor (Loney, I: 158).