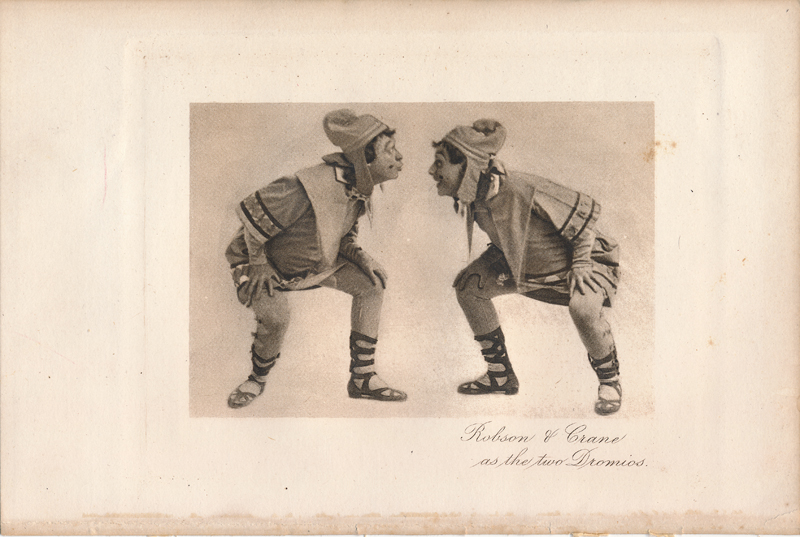 Set in the city of Ephesus, The Comedy of Errors concerns the farcical misadventures of two sets of identical twins. Many years earlier, the Syracusan merchant Egeon had twin sons, both named Antipholus. At their birth, he bought another pair of newborn twins, both named Dromio, as their servants. In a shipwreck, Egeon lost his wife, one of his sons, and one of the Dromios.

Egeon’s remaining son, Antipholus of Syracuse, and his servant, Dromio of Syracuse, come to Ephesus, where—unknown to them—their lost twins now live. The visitors are confused, angered, or intrigued when local residents seem to know them.

Similarly, Antipholus and Dromio of Ephesus run into puzzling reactions from the people they know—who have been dealing, unwittingly, with the Syracusans. Antipholus of Ephesus’s wife bars him from his house; he is jailed after a jeweler claims he owes money on a gold chain he never received.

When the four twins come together, all is finally resolved. In one last twist, their parents reunite as well (reproduced with permission from Folger).

Postcards of The Comedy of Errors:

Productions of The Comedy of Errors:

1899 A single matinee performance of The Comedy of Errors was performed on June 6 at Terry’s Theatre (London). The Antipholi were played by Frank Wilson and Leon Quartermaine and the Dromios by Ben Greet and W. R. Staveley (Wearing, II: 812).

Frank Benson opened a three-week Shakespeare Festival at Stratford-upon-Avon with The Merchant of Venice. Henry Irving was to play Shylock, but had to withdraw due to illness; Frank Benson substituted as Shylock. The Comedy of Errors was revived at the Festival for the first time since 1884 (Loney, I: 27).