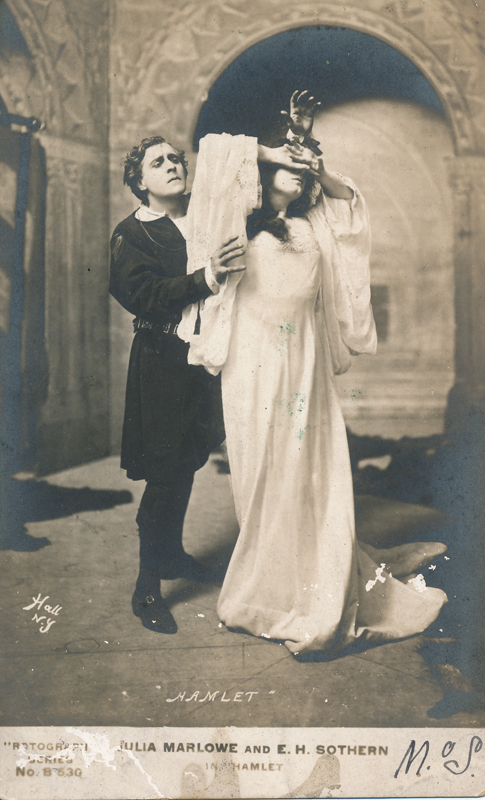 What is this quintessence of dust? (2.2)

Events before the start of Hamlet set the stage for tragedy. When the king of Denmark, Prince Hamlet‘s father, suddenly dies, Hamlet’s mother, Gertrude, marries his uncle Claudius, who becomes the new king.

A spirit who claims to be the ghost of Hamlet’s father describes his murder at the hands of Claudius and demands that Hamlet avenge the killing. When the councilor Polonius learns from his daughter, Ophelia, that Hamlet has visited her in an apparently distracted state, Polonius attributes the prince’s condition to lovesickness, and he sets a trap for Hamlet using Ophelia as bait.

To confirm Claudius’s guilt, Hamlet arranges for a play that mimics the murder; Claudius’s reaction is that of a guilty man.  Hamlet, now free to act, mistakenly kills Polonius, thinking he is Claudius. Claudius sends Hamlet away as part of a nefarious plot.

After Polonius’s death, Ophelia goes mad and later drowns. Hamlet, who has returned safely to confront the king, agrees to a fencing match with Ophelia’s brother, Laertes, who secretly poisons his own rapier. At the match, Claudius prepares poisoned wine for Hamlet, which Gertrude unknowingly drinks; as she dies, she accuses Claudius, whom Hamlet kills.  Then first Laertes and then Hamlet die, both victims of Laertes’s rapier (reproduced with permission from Folger).

1890 Frank R. Benson‘s production of Hamlet opened at The Globe Theatre (London) on March 6 and ran until April 18. Benson played Hamlet, and the other principal players were Charles Cartwright as Claudius, George F. Black as Polonius, Herbert Ross as Laertes, Otho Stuart as Horatio, Stephen Phillips as the ghost, Ada Ferrar as Gertrude, and Lady Constance Benson as Ophelia (Wearing, I: 14).

1891 Wilson Barrett’s production of Hamlet with him in the title role ran at the Olympic Theatre (London) for ten performances from April 13 until April 18; the play was revived in May for three performances. The cast included Austin Melford as Claudius, Louise Moodie as Gertrude, Winifred Emery as Ophelia, Stafford Smith as Polonius, H. Cooper Cliffe as Laertes, and S. Miller Kent as Horatio (Wearing, I: 111).

1892 Herbert Beerbohm Tree played Hamlet in his production of the play at the Haymarket Theatre (London) for 116 performances (January 21 until May 28). F. H. Macklin appeared as Claudius, Henry Kemble as Polonius, Arthur Dacre as Horatio, and Fred Terry and Robb Harwood as Laertes. Mrs. H. B. Tree played Ophelia and Rose Leclercq, Gertrude (Wearing, I: 187-8).

1897 Ben Greet directed an independent theatre company’s production of Hamlet at the Olympic Theatre (London); it opened on May 10 and ran for eighteen performances. Hamlet was played by Nutcombe Gould, Ophelia by Lily Hanbury, Claudius by Frank Dyall, Gertrude by Mary Allestree, Ben Greet as Polonius, George R. Foss as Laertes, and Alfred Kendrick as Horatio (Wearing, II: 655).

1897 Herbert Beerbohm Tree played Hamlet in his production of the play at Her Majesty’s Theatre (London) in two performances in August. Mrs. Tree played Ophelia, and the other principle parts were played by S. A. Cookson as Claudius, E. Holman Clark as Polonius, and Frances Ivor as Gertrude (Wearing, II: 684).

1898 Johnston Forbes-Robertson revived his production of Hamlet at the Lyceum Theatre (London) on November 7 for fifteen performances. He played Hamlet and Mrs. Patrick Campbell played Ophelia. Others in the cast were Bernard Gould as Claudius, Cecil Cromwell as Gertrude, Robert Taber as Laertes, Berte Thomas as Horatio, and J. H. Barnes as Polonius (Wearing, II: 770).

1899 Sarah Bernhardt performed her celebrated Hamlet at the Adelphi Theatre (London); the play opened on June 12 and Bernhardt gave sixteen performances. The translation and adaptation of Hamlet was by Eugene Morand and Marchel Schwob (Wearing, II: 813-14).

1899 Wilson Barrett played Hamlet at the Lyceum Theatre (London) from December 12 to the 16. Ophelia was played by Maud Jeffries, Claudius by J. Carter Edwards, Gertrude by Alida Cortelyou, Polonius by Horace Hodges, and Horatio by Basil Gill (Wearing, II: 846).

1900 Frank Benson’s troupe performed Hamlet 6 times in March at the Lyceum Theatre (London). Benson played Hamlet and his wife Constance Benson played Ophelia. Other regulars in his company were Oscar Asche as Claudius, Ada Ferrar as Gertrude, and Frank Rodney as Laertes. The other plays in that season at the Lyceum were Henry V, Twelfth Night, and Antony and Cleopatra. An interesting note is that a young Isadora Duncan played one of the fairies in A Midsummer Night’s Dream (Wearing, I: 12; Loney, I: 3).

1902 Johnston Forbes-Robertson played Hamlet in his production of the play in July at the Lyric Theatre in London. Ophelia was played by Gertrude Elliott (Wearing, I: 173).

1905 On April 4 Henry Irving opened in Otho Stuart’s revival of Hamlet at the Adelphi Theatre, London. On July 4, Frank Benson moved into the Adelphi for The Comedy of Errors; Ortho Stuart then returned to the Adelphi with a production of A Midsummer Night’s Dream (Loney, I: 27).

1909 On February 8, H. B. Irving revived Hamlet at the Shaftesbury Theatre, London. His wife Dorothea Baird played Ophelia (Loney, I: 49).

1910 Starting on February 7, E. H. Sothern and Julia Marlowe play for six weeks at the Academy of Music, New York City. Included in the repertory are Hamlet, As You Like It, The Taming of the Shrew, Romeo and Juliet, The Merchant of Venice, and Twelfth Night (Loney, I: 53).

1910 Beginning on March 28, several companies presented a London Shakespeare Festival at His Majesty’s Theatre. Herbert Beerbohm Tree’s company played The Merry Wives of Windsor, Julius Caesar, Twelfth Night, and Hamlet. Norman McKinnel presented King Lear and The Merchant of Venice; Arthur Bourchier and his company came next with The Merchant of Venice. H. B. Irving played Hamlet, and Frank Benson’s “Bensonians” followed with the Taming of the Shrew and Coriolanus. Poel’s Elizabethan Stage Society gave a performance—in the “original” sixteenth-century style—of The Two Gentlemen of Verona. Lewis Waller revived his Henry V, and Tree returned to close the Festival with The Merchant of Venice and Richard II (Loney, I: 54).

1910 On December 5, E. H. Sothern and Julia Marlowe opened a season of Shakespearean repertory at the Broadway Theatre, New York City. Among the plays were Hamlet, Macbeth, Romeo and Juliet, and As You Like It (Loney, I: 54).

1911 E. H. Sothern and Julia Marlowe opened their season at the Broadway Theatre, New York City. In the repertory were Macbeth, The Taming of the Shrew,Hamlet, The Merchant of Venice, Romeo and Juliet, and Twelfth Night. They returned on November 20 and added As You Like it to the list (Loney, I: 158).

1911 On July 22 Stratford’s second summer season began; this is the year that Baliol Holloway debuted with the Bensonians. The plays performed are A Midsummer Night’s Dream, Henry V, Richard II, The Merchant of Venice, Romeo and Juliet, As You Like It, The Taming of the Shrew, Hamlet, and The Tempest (Loney, I: 159).

1913 Frank Benson’s summer season of Shakespeare’s plays opened on August 2 with The Merchant of Venice; other plays performed that season were As You Like It, Hamlet, King John, Richard II, The Merry Wives of Windsor, Much Ado About Nothing, Romeo and Juliet, The Taming of the Shrew, Twelfth Night, and Henry IV, Part 2 (Loney, I: 68).

1914 William Poel revived his production of Hamlet at the Little Theatre in London; Esme Percy played Hamlet (Loney, I: 72).

1914 On October 5, the Old Vic Theatre, London, under the management of Lilian Baylis, mounted a production of The Taming of the Shrew. Additionally, the following plays were performed for the first time in 1914 at the Old Vic: Hamlet, The Merchant of Venice, The Tempest, The Merry Wives of Windsor, The Comedy of Errors, Twelfth Night, and A Midsummer Night’s Dream. Baylis will by 1923 have produced the entire Shakespeare canon of thirty-seven plays (Loney, I: 73).