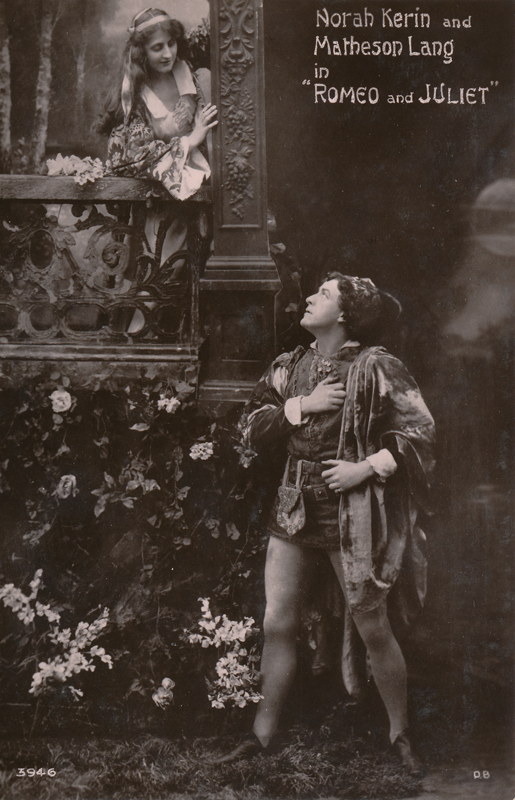 For never was a story of more woe Than this of Juliet and her Romeo (5.3).

The oft-quoted prologue of Romeo & Juliet calls the title characters “star-crossed lovers”—and the stars do seem to conspire against these young lovers.

Romeo is a Montague, and Juliet a Capulet. Their families are enmeshed in a feud, but the moment they meet—when Romeo and his friends attend a party at Juliet’s house in disguise—the two fall in love and quickly decide that they want to be married.

A friar secretly marries them, hoping to end the feud. Romeo and his companions almost immediately encounter Juliet’s cousin Tybalt, who challenges Romeo. When Romeo refuses to fight, Romeo’s friend Mercutio accepts the challenge and is killed. Romeo then kills Tybalt and is banished. He spends that night with Juliet and then leaves for Mantua.

Juliet’s father forces her into a marriage with Count Paris. To avoid this marriage, Juliet takes a potion, given her by the friar, which makes her appear dead. The friar will send Romeo word to be at her family tomb when she awakes. The plan goes awry, and Romeo learns instead that she is dead. In the tomb, Romeo kills himself. Juliet wakes, sees his body, and commits suicide. Their deaths appear finally to end the feud (reproduced with permission from Folger).

1890 A production of Romeo and Juliet by Hugh Moss opened at the Globe Theatre (London) on June 6 and ran until August 8. The players were Otis Skinner as Romeo, Adelaide Moore as Juliet, John Nesbitt as Friar Laurence, George F. Black as Capulet, Edwin Wilde as Tybalt, Mark Quinton as Mercutio, May Prothero as Lady Capulet, and Mrs. Charles Calvert as the Nurse (Wearing, I: 46).

1895 Johnston Forbes-Robertson played Romeo and Mrs. Patrick Campbell, Juliet in Forbes-Robertson’s production of the play; Romeo and Juliet opened at the Lyceum Theatre (London) on September 21 and ran until December 21 for seventy-nine performances. Others in the cast were Arthur Grenville as Paris, George Warde as Capulet, Dolores Drummond as the Nurse, Charles F. Coghlan as Mercutio, Will Dennis as Tybalt, and Nutcombe Gould as Friar Laurence (Wearing, I: 509-10).

1896 In Romeo and Juliet Esme Beringer played Romeo at the Prince of Wales’s Theatre at a matinee performance on May 15. The other principle parts were played by Vera Beringer as Juliet, Mrs. E. H. Brooke as the Nurse, W. H. Vernon as Mercutio, Arthur Stirling as Friar Laurence, and Frederick Volpe as Tybalt (Wearing, I: 565-66).

1899 Maude Adams and William Faversham played the leads in Charles Frohman’s production on May 8 at the Empire Theatre.

1904 On February 17, with Charles Lander as Romeo and Therza Norman as Juliet, J. H. Leigh began a Shakespeare revival at the Royal Theatre, London (Loney, I: 22).

On October 17, the New York City producer Charles Frohman presented E. H. Sothern and Julia Marlowe playing for the first time together in a Shakespeare play. The performances included Hamlet, Romeo and Juliet, and Much Ado About Nothing (Loney, I: 23).

1908 Matheson Lang‘s production of Romeo and Juliet opened at the Lyceum Theatre, London, on March 3 and ran through May 30, with eighty-eight performances. The principal players were Matheson Lang as Romeo, Nora Kerin as Juliet, Eric Mayne and Gordon Bailey as Mercutio, Halliwell Hobbes as Tybalt, Herbert Grimwood as Capulet, Frederick Ross as Friar Laurence, Mary Allestree as Lady Capulet, and Blanche Stanley as the Nurse. The managing director was Henry R. Smith and the producer was Ernest Carpenter (Wearing, London Stage; Loney, I: 44 ).

1909 Gerald Lawrence and Fay Davis open their Shakespeare season on April 12 at the Royal Court Theatre, London. The plays included As You Like It, Romeo and Juliet, The Merchant of Venice, andTwelfth Night (Loney, I: 49).

1910 Starting on February 7, E. H. Sothern and Julia Marlowe play for six weeks at the Academy of Music, New York City. Included in the repertory are Hamlet, As You Like It, The Taming of the Shrew, Romeo and Juliet, The Merchant of Venice, and Twelfth Night (Loney, I: 53).

On December 5, E. H. Sothern and Julia Marlowe opened a season of Shakespearean repertory at the Broadway Theatre, New York City. Among the plays were Hamlet, Macbeth, Romeo and Juliet, and As You Like It (Loney, I: 54).

1911 On April 17 the annual Stratford Shakespeare Festival opened with The Merry Wives of Windsor.This year Frank Benson also offered The Merchant of Venice, Twelfth Night, Much Ado About Nothing, Henry V, Julius Caesar, Macbeth, As You Like It, Romeo and Juliet, A Midsummer Night’s Dream, andRichard III (Loney, I: 158).

E. H. Sothern and Julia Marlowe opened their season at the Broadway Theatre, New York City. In the repertory were Macbeth, The Taming of the Shrew,Hamlet, The Merchant of Venice, Romeo and Juliet,and Twelfth Night. They returned on November 20 and added As You Like it to the list (Loney, I: 158).

On July 22, Stratford’s second summer season began; this is the year that Baliol Holloway debuted with the Bensonians. The plays performed are A Midsummer Night’s Dream, Henry V, Richard II, The Merchant of Venice, Romeo and Juliet, As You Like It, The Taming of the Shrew, Hamlet, and the Tempest (Loney, I: 159).

Fred Terry produced a version of Romeo and Juliet—he called in a “new arrangement”—at the New Theatre, London, on September 2. The principals were Vernon Steel and Phyllis Neilson-Terry (Loney, I: 159).

1913 On March 22 E. Harcourt Williams and Lillian Hallows opened at London’s Prince’s Theatre as Romeo and Juliet (Loney, I: 68).

In the month of June Herbert Beerbohm Tree staged a revival of The Merchant of Venice, Twelfth Night, Julius Caesar, and Romeo and Juliet; Tree played Shylock, Malvolio, Marc Antony, and Mercutio (Loney, I: 68).

Frank Benson’s summer season of Shakespeare’s plays opened on August 2 with The Merchant of Venice; other plays performed that season were As You Like It, Hamlet, King John, Richard II, The Merry Wives of Windsor, Much Ado About Nothing, Romeo and Juliet, The Taming of the Shrew, Twelfth Night, and Henry IV, Part 2 (Loney, I: 68).